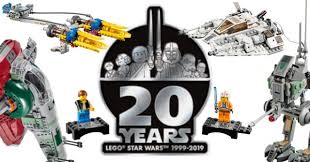 According to washingtonpost.com the popular social media site TikTok is experiencing an invasion of the little plastic bricks you and I both love known as Lego. A very specific type of Lego that is…the Star Wars variety. According to the article The Cantina Band track from the soundtrack of A New Hope is everywhere and the hashtag #LSW (and acronym for Lego Star Wars) has over 900 million views, and the feed is littered with profile pics from the famous game. TikTok has approximately 500 million users wold wide so the obsession seems to have no bounds.  What caused this invasion? Several factors can be assumed.

First, the Lego Star Wars Video game was released in 2005 to coincide with the release of Revenge of the Sith. It only featured levels from the original trilogy however a year later Lego Star Wars II: The Original Trilogy was released. Over the next 10 years three more titles were released on all the major platforms. So for the past 15 years The Lego Star Wars games have brought joy and contentment old and young alike. That being said the average age of a TikTok user is between 16 and 24 then one can assume that they grew up playing this game and are now feeling a sense of nostalgia. The games were made for children hence they were very easy. There was no death and restart the level you just respawned and continued playing. This made it an ideal family game because any one could play it no matter what skill level they were. Lego Star Wars: The Video Game has sold over 6.8 million copies worldwide, Lego Star Wars II has sold over 8.3 million, The Complete Saga has sold over 4.1 million, and the three combined have sold over 21 million.

Secondly the hype could be surrounding the release of a new game this year. 2020 will see the release of the sixth game in the series Lego Star Wars: The Skywalker Saga. For those that grew up with the games and the films this will be all nine of the saga movies in one massive game. Each episode will include five story missions for a total of 45 missions. It has been teased by Travelers Tales ( the video games creators) that there will be over 200 playable characters.  In 2019, the number of Lego Star Wars minifigures has surpassed 1000.  As well as the story there will also be random encounters on a variety of different planets. As of now there is no release date on that it will be released sometime in 2020.

So what impact will all of this social media buzz have on Star Wars Lego itself? I’m positive it will be nothing but good. Lego Star Wars has a huge following of fans and the social media push can only add to that. Star Wars was the first franchise the Lego purchased and according to Google for the fiscal year of 2018 and 2019 it was the top selling theme at Lego. With constant flow of new Star Wars content more sets  and games are undoubtedly on the horizon. The two stand alone movies have not yet seen a treatment in the Lego video games and  The Mandalorian hasn’t been touched on either.

To all the TikTok’ers out there reliving your sense of nostalgia, getting ready for the new game or just surfing the wave of whats trending, keep doing what you’re doing and welcome to the world of Star Wars fandom