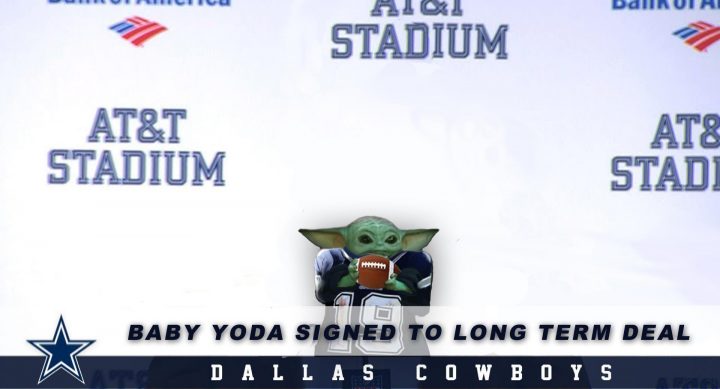 “He united an entire fanbase as a rookie, imagine what he can do for us and our franchise!”

The words of Jared Jones resonated throughout the front office of the Dallas Cowboys. The team started off the year with a bang, winning their first three games. Now they are staring at an even record, having dropped three of their last four in miserable fashion. The fans have been voicing their displeasure and those cries have been heard loud and clear.

“You take a look at what he did for Star Wars and it’s something else,” said star running back Ezekiel Wicket. “He’s going to provide us a spark that we badly need.”

Star running back Ezekiel Wicket is excited to hear about his new teammate.

The head coach of the team, Jerry Garrett, declined to comment on where Baby Yoda will play next week. “When it comes to him, I’m running a complicated computer algorithm that involves several different scripts being executed by top of the line quantum computers and hosted Azure Cloud devices. I don’t have time to think about coaching.”

Reaction of the news has been taken well by the majority of the football league. “I think it’s terrific! FINALLY people can stop telling me how old I am!” exclaimed Tim Brady. However, Lucasfilm executives were not so thrilled by hearing that Baby Yoda will go pro.

“Of course we’re concerned about injuries,” said Jed Davreau, executive producer of “The Mandalorian”. “We have him under contract for another season and a trilogy of films. We need to protect him. He’s a big boy so he can play if he wants, but did it have to be for the Cowboys? I mean…the Cowboys??”

The league is also concerned because of Baby Yoda’s abilities and talents.

“We’ll watch this closely to see how The Force is used during the course of the game,” said league Commissioner Roger Goody. “Technically, we don’t have a penalty for lifting opponents off the ground without touching them, but rest assured I’ll suspend him for 67 games, then reduce it to one half, then extend it to 12 games again, depending on my Magic 8-Ball tells me.”

Author’s Note: Yes this is a spoof article meant to give you a chuckle for your weekend and should not be taken seriously. I’ll write one of these each weekend to help lighten the mood. Special thanks to Philip Gilbert in the UK for helping out with the graphic work.