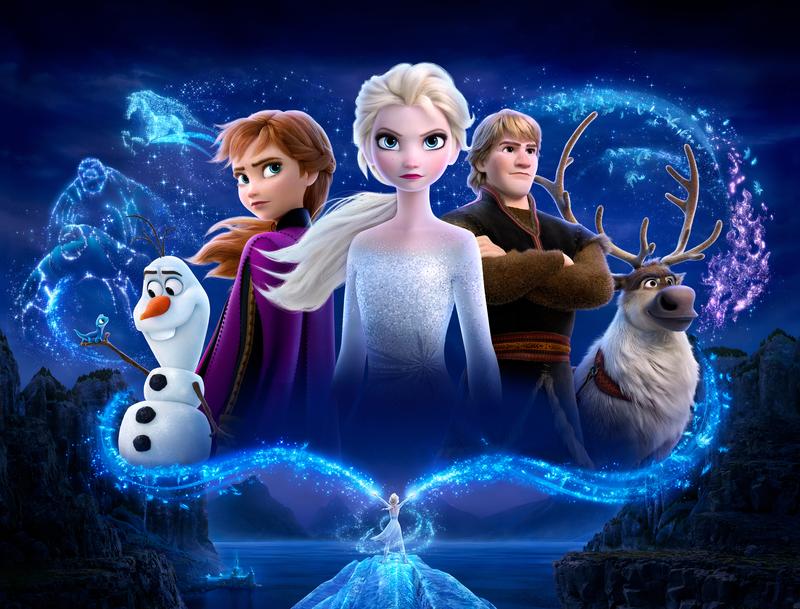 On November 27, 2013 Walt Disney Studios introduced Anna, Elsa, their friends and family from Frozen to the world. The film grossed 1.276 billion in the world wide box office. For the last six years the world has waited to see if there would be a follow up to this record smashing film, and now Frozen 2 is here and I am excited to tell you about it!

Six years have passed since Anna, Elsa, Olaf and Kristoff sent that horrible Hans back to his brothers at the end of the first “Frozen” film. The family has settled into their new normal with Elsa ruling Arendelle, Anna keeping a protective but loving eye on Elsa while spending time with her best friend Olaf and dating Kristoff. Olaf is coming to grasp with growing older, and Kristoff is trying to figure out how to propose to Anna (which we all know from commercials and previews.) Everyone is living happily together in the royal palace with their eight thousand salad plates. As we learn more about Arendelle and the royal families history, we also learn that there is a siren who calls to Elsa from the North. The family will venture north to the Enchanted Forest to find the source of the voice and save Arendelle. They will learn about their past as a family and kingdom, about Elsa’s powers, and meet interesting new characters like Lt. Mattias of the Arendelle Royal Guard, Yelana the leader of the Northuldra people, as well as several Northuldrans Honeymaren and Ryder, and the adorable Bruni.

Without giving anything away I want to stress that this movie is not as carefree and perky as the original Frozen movie. In Frozen the biggest challenges were realizing Hans was a dirtbag and that fear can cause us to do scary things, but that love thaws. In “Frozen Fever” the most disturbing part of the short was realizing that the Snowgies we had all fallen for during the short’s preview trailers, were in fact the physical manifestation of Elsa’s cold. Yes, Frozen 2 has the characters we all love as well as adorable new characters. But it also directly talks, and sings, about growing up and changing, death, loss and betrayal. Understand that the discussion of death is not just a ship sinking like in Frozen and the tone of a song changing, there are points where as an adult who loves the main character I am openly going “No, wait they didn’t? They couldn’t? They did!” followed by some pretty ugly crying in the theater. Anna’s song “Do The Right Thing” comes after a particularly emotional part in the story line and really made me think about people who are struggling with hard times such as depression or the loss of a loved one. To give you an idea of how deep this song is, I want to share with you the lyrics of the first two verses:

These lyrics are sung with gut wrenching tear filled emotion and just listening to the music today, even knowing how the movie ends has me in tears. Kristen Anderson-Lopez and Robert Lopez  teased us with their talents when they wrote the music for the original Frozen, and teased us with where their skills could take us with the songs they wrote for Frozen on Broadway. In Frozen 2, they invited us into their home, set us down for dinner and hit us with every piece of talent we knew they had but were just waiting to see. Is this movie okay for little kids? I’ll be honest I want to say no. I realize they all love Anna, Elsa, Olaf, Kristoff and Sven, but there are scenes and parts of the story that may upset and confuse them as well as lead to discussions about death and loss that you might not be ready to have with your littles.

In talking to my 11-year old niece, who has been my Disney/Marvel/Star Wars movie release night review partner for years and is spot on in explaining what parts of movies will scare or upset younger children, she feels that topic wise this movie is for kids 6 and up. I would urge you that if you insist on taking younger kids that you see the movie in theaters go see it on your own first, and if needed take your children out of the theater for about five minutes once Anna and Olaf go over the waterfall in the ice canoe, or at the very least take them out of the theater if they start crying so they don’t scare other children.

Frozen 2 is darker than the original Frozen. Does this make it a bad movie? No, but is it something you might want to see before you take your under six year old to? Yes, very much yes. The movie still has some wonderfully funny moments,  for example Kristoff’s  song “Lost In The Woods” is a touching song lyrically, but visually it had our family of nine (that ranges from 11 years old to early 70s) laughing our butts off. Our whole party loved Frozen 2 and we all want to see it again.  Frozen 2 still embraces the importance of family that we saw in Frozen and it also reminds us that sometimes doing the right thing is hard, and that we may have to make those hard choices alone, but in the end doing the right thing is worth it. That being said, if you want spoilers keep reading. If not please close this article and thanks for reading!

For a in-depth look at Frozen 2’s plot, with spoilers visit “Frozen 2: The Whole Story (With All the Spoilers).”
All images courtesy of Disney.